Residents, employers, and the government of the Caribbean island of Anguilla benefit from ground-breaking new tax software. The move from a paper-based administration to a modern online portal for the management and payment of tax returns is a huge improvement. BearingPoint Caribbean from Curaçao developed the software in partnership with Dutch application developer Synobsys. More releases will follow soon because the solution is designed for use in multiple countries. Next to the tax portal, a new portal for social services in Anguilla will be released in 2022.

Many smaller countries and islands in the Caribbean face a major challenge: modernizing the way they collect tax and how companies and residents manage their tax returns. Instead of income tax, these countries often have a system of various minor tax types (and benefits) that are paid at different moments.

For many years, BearingPoint Caribbean has been developing tax and social security software for Small Island Developing States (SIDS), a unique group of small countries recognized by the United Nations due to their specific social, economic, and environmental challenges and vulnerabilities. Increasing internationalization means there is a growing demand for the modernization of legacy systems, particularly in these smaller countries.

In developing a new online tax portal with specialist modules, BearingPoint wanted to replace components of the existing online portals that are linked to the Multi Tax Solution (MTS). This solution is built on the Be Informed low-code platform, which has been in use for many years. It will now be combined with OutSystems as an additional low-code platform. This extra platform was used to build the new modules. Since early 2020, the company has worked on this project in close partnership with Synobsys, an OutSystems specialist from Rotterdam (The Netherlands). “OutSystems is very suitable for online portals and linking to other platforms. We wanted to bring in extra knowledge about the platform”, says Esmeralda Levens, Senior Manager of Solution Development at BearingPoint Caribbean.

To realize the desired solutions, BearingPoint’s development team in Curaçao (of solution architects, business analysts, software developers, testers, and a Scrum master) worked closely with five developers and the OutSystems MVP (Most Valuable Professional) at Synobsys. Due to the time difference (5 or 6 hours), an unusual working method arose. The agile working method (Scrum) consists of sprints of three weeks. The development team’s daily Stand Up, which usually takes place in the morning, is now held at two different times: in the morning in Rotterdam and again in the afternoon with the team in Curaçao, when it is morning there and their working day begins. Levens: “It took a while to get used to, but this works well. With video conferencing, we function as one single team.”

In use in Anguilla

The first component of the newly developed solution was launched in Anguilla in mid-2021. The IRD (Inland Revenue Department) is responsible for collecting domestic tax revenues on this island in the Caribbean Sea, close to the island of Sint Maarten. The first release was the online portal for filing and managing tax returns. The online payment of taxes has been added in February 2022.

The new portal represents a major step forward for the residents, employers, government, and IRD of Anguilla, says Michella Weverink, Product Owner at BearingPoint. “The biggest improvement is the automation of the entire process, which was primarily paper-based in the past. People had to queue at the IRD counters to submit their tax returns, pay their taxes, or arrange other affairs. With the previous system, employees of the IRD also had to type in all the submitted tax returns. The entire process took a great deal of time. With the new system, managing and paying taxes works much better and more efficiently, with much less risk of human error.” 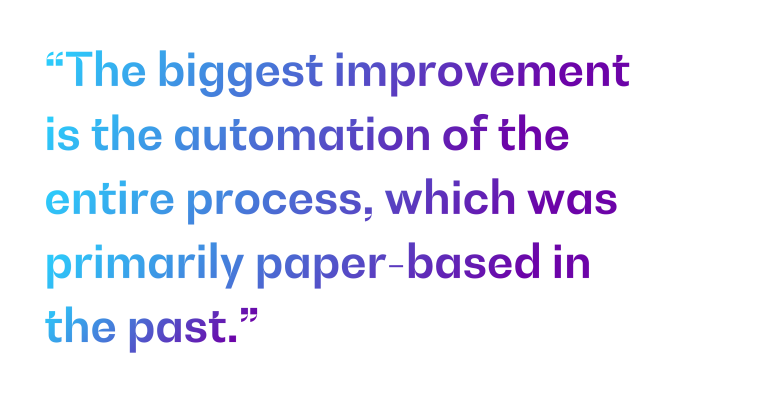 The ease of use and ability to view data online also result in more and better tax returns, which increases tax revenues. The new system also promotes collaboration between the 21 departments in Anguilla that generate revenues, of which the IRD is just one of them. Levens: “Also Customs, the Police, and even the public library will be connected to the portal and can make use of the payment module of the MTS for the central registration of their revenue.”

The government of Anguilla has now launched a campaign (‘Skip the line’) to inform residents about the use and benefits of the online portal. The campaign includes this video.

A new portal will also be launched for social services provided by the Social Security Board. This is expected to take place in the second quarter of 2022. This portal was realized with the OutSystems platform and is linked to the Multi Benefit Solution (MBS). This MBS was realized with components built in OutSystems and the Be Informed platform, which has been used by BearingPoint for some time. BearingPoint has also launched the overarching MyGovernment Portal.

BearingPoint Caribbean’s solution will be developed further for Anguilla and is also available for other countries. Synobsys will continue to be involved with the development of the solution.

Synobsys is an innovative Dutch developer of mobile-first business applications. Using low-code (OutSystems), Synobsys develops solutions that help organizations realize their digital transformation. As a dedicated OutSystems partner, Synobsys has the specialists and tools to develop these applications, and also one of the world’s few OutSystems MVPs (Most Valuable Professional), appointed by OutSystems. This gives Synobsys direct access to information, knowledge, and support from this leading low-code platform.

This article was originally published in Dutch here by Synobsis.